The Ruins of Electrification and Soviet Power

Mural in a school in Pripyat.

'In our day', Nikita Khrushchev told a crowd in the Lenin Stadium of Moscow on 28 September 1959, 'the dreams mankind cherished for ages, dreams expressed in fairytales which seemed sheer fantasy, are being translated into reality by man's own hands'. He meant, above all, the [fairytale]'s dreams of abundance. Humanity's ancient condition of scarcity was going to end, imminently.

... Khrushchev believed that the plenty of the stories was coming in Soviet Russia, and coming because of something that the Soviet Union possessed and the hungry lands of capitalism lacked: the planned economy. Because the whole system of production and distribution in the USSR was (in Lenin's words) 'one office, one factory', it could be directed, as capitalism could not, to the fastest, most lavish fulfilment of human needs.

... The Russian fairytale began to be told in the decade of famine before the Second World War, and it lasted officially until Communism fell. Hardly anyone believed it, by the end. In practice, from the late 1960s on all that the Soviet regime aspired to do was to provide a pacifying minimum of consumer goods to the inhabitants of the vast shoddy apartment buildings ringing every Soviet city.

But once upon a time the story of red plenty had been serious: an attempt to beat capitalism on its own terms, and to make Soviet citizens the richest people in the world. For a short while, it even looked - and not just to Nikita Khrushchev - as if the story might be coming true. Intelligence was invested in it, as well as foolishness: a generation's hopes, and a generation's intellectual gifts, and a tyranny's guilty wish for a happy ending.

— from “Red Plenty”, by Francis Spufford.

Communism is Soviet power plus electrification of the whole country.

— Vladimir I. Lenin, Report on the Work of the Council of People’s Commissars. December 22, 1920.

Witnessing the ruins of Chernobyl and Pripyat is moving, of course, because you inescapably see the immense impact the disaster had on the lives of millions of people living around it. But it’s also moving in a secondary way because of how inevitably we see Chernobyl as perfectly metaphorical. For westerners, the lesson is often taken as the risks of nuclear power. Those in the former eastern bloc see it more as a metaphor of the failure of the dreary, secretive, inept Soviet dictatorship, and of Communism generally.

As late as the end of the 1960s, the Soviet Union had economic growth far surpassing that of western capitalist countries. Communists genuinely hoped, and Capitalists genuinely feared, that Communism would prove superior in the long run and overtake the west in terms of living standards for ordinary people within a couple of decades.

This in a country that a generation before was the bloodiest theatre of the bloodiest war in history, and a generation before that was an absolute monarchy where 80% of the country toiled on farms in circumstances little better than serfdom. While everyone admitted the Soviet Union was well behind the west, once those initial handicaps were overcome, who knew what was possible?

It was not to be. 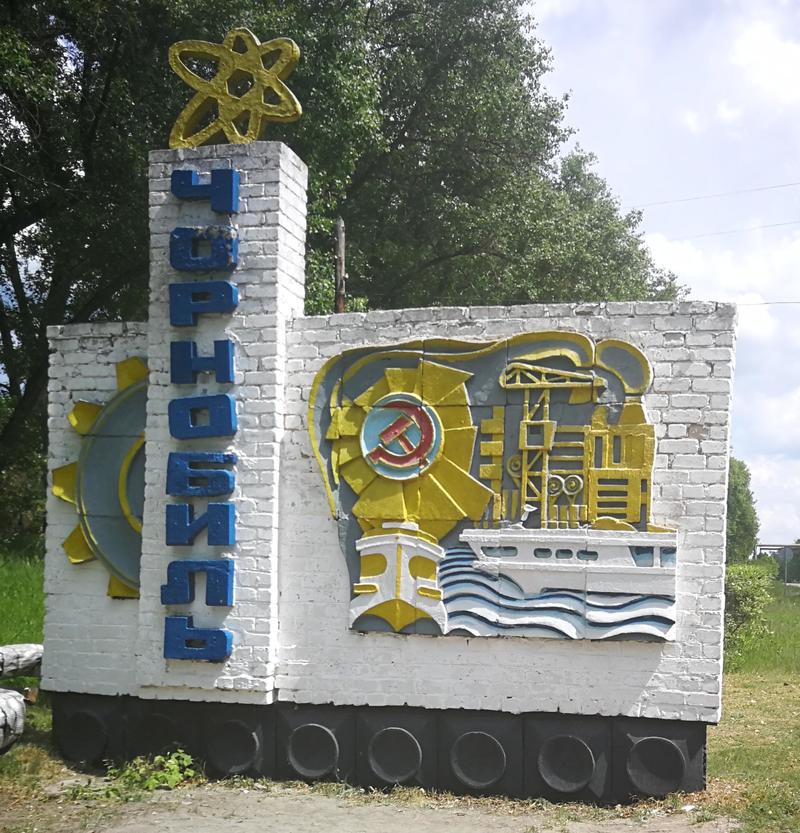 The Vladimir I. Lenin Nuclear Power Station began construction in 1972. Two years earlier, the town of Pripyat had begun construction as a home for the thousands of workers the plant required. The scheme was in part a propaganda effort to show off the “ideal” Soviet economy. Brezhnev, who would later be synonymous with the stagnation of the later years of the Soviet economy, had only come to power half a decade before. While the wheels were coming off the once seemingly-unstoppable train of Communism, there were still many believers in “red plenty”.

It was in a sense the last gasp of true belief in the ability of Communism to provide abundance for all, and the beginning of an era in which everyone simply went through the motions. Vast resources were poured into Chernobyl, at the expense of the rest of the Soviet Union.

But the propaganda effort depended on a real effort. In order to show off what Soviet economic planning could supposedly do everywhere, it would have to actually do it in one place: on the banks of the Pripyat River.

Even at this point, Communism as an experiment was already seen as having failed in the west, and also increasingly a view held by people in private in the Soviet Union itself, although certainly not out loud. There were still people in 1970, though, who were trying to make Communism work: a few who still believed, and plenty more who thought they could do good things for the people of the fifteen Soviet republics, despite the dysfunctional system they worked in.

To a degree, the Pripyat scheme succeeded. While perhaps not up to the standards the middle class would then have enjoyed in, say, West Germany, or Canada, it was still a town of 49,000 people, who had good houses, good jobs, good schools, good medical care, a range of middle class consumer goods approaching that of the west, and plentiful opportunities for socialisation, recreation and personal improvement: a music and art school, gyms, swimming pools, cinemas with Soviet and foreign films, libraries; fishing, hiking, boating, and (famously) a permanent amusement park. 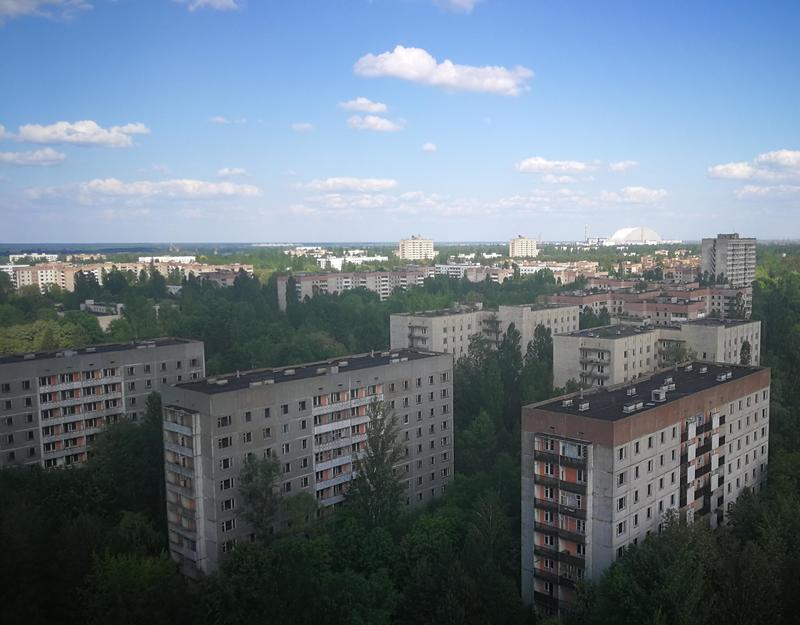 The town of Pripyat, once the pride of the Soviet Union, now being reclaimed by the trees.

The aptly-named “city of flowers” was as well-planned as any Soviet citizen of the 1970s could hope for. The layout of buildings had been designed to allow effective use of the space between for parks, gardens, and roads wide enough to be “traffic jam proof”.

Hundreds of thousands of qualified workers from across the Soviet Union applied to work at Pripyat or the power station. Millions more were simply not permitted to apply, since demand was so great.

Pripyat was, in a sense, both real and fake. Under the surface the town was exactly as it was promised. But it was only at the huge expense of the rest of the Soviet Union, labouring to build in one specific place a fiction of what the bulk of the country could never really be. 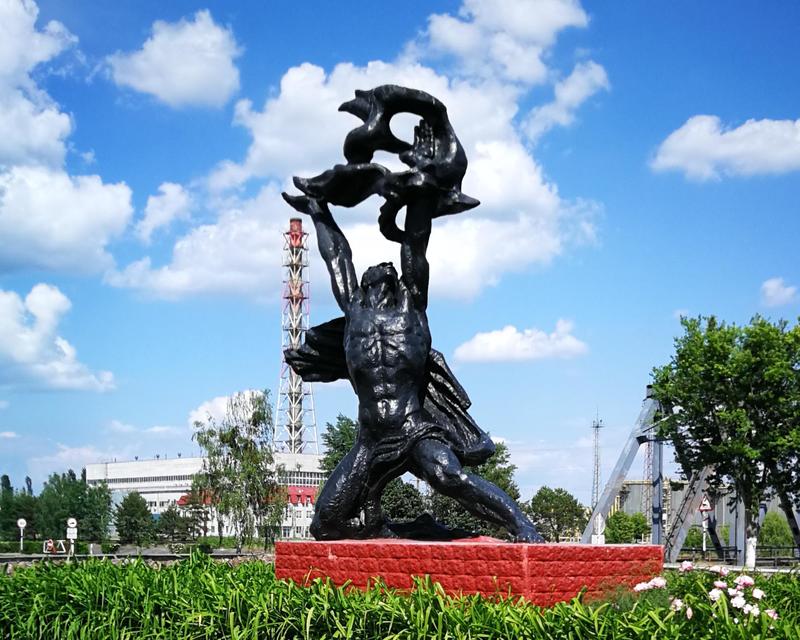 The statue of Prometheus at Chernoybl, relocated from the Prometheus Cinema to outside Reactor 4.

The statue of Prometheus originally stood in front of the cinema of the same name, and the reference to nuclear power is obvious - and two-fold, since while the sun is only metaphorically on fire, it is very literally a nuclear reaction. The statue has since been moved to outside Reactor 4, where more visitors to the zone can see it.

And so on one level, the irony at Chernobyl is perfect, that just as the legend of Prometheus ended badly for Prometheus, chained to a rock to have his liver pecked out, our attempts to make Communism or nuclear power work (pick your favourite metaphor), are doomed. 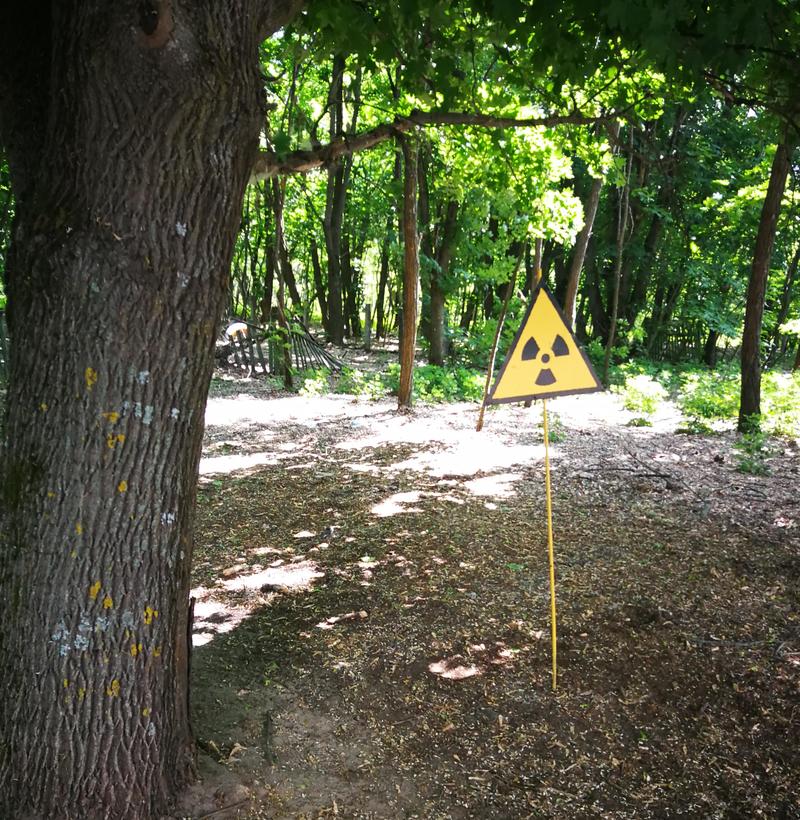 Once farmland, Chernobyl is being reclaimed by the trees, despite needing to sink their roots through a layer of still-radioactive soil.

But the legend of Prometheus ends badly for Prometheus. It doesn’t end badly for humanity, which got to keep the secret of fire, and has benefitted from it ever since. Prometheus is not just a tragic figure, he is a hero, sacrificing himself for humanity.

Was Chernobyl a heroic martyrdom for the rest of humanity? No. It was simply a tragedy. The plant blew up because the design and operation were deeply unsafe, in ways that weren’t tolerated in the west at the time. Critical safety systems were known not to work. Under political pressure, management deliberately violated approved procedure to run tests on the live reactor. A secretive and nonfunctional government that could not coordinate its own efforts or get vital information to those who needed it, utterly botched its response.

That government would collapse shortly afterwards, along with most other Communist states. The world would almost completely halt construction of nuclear power plants for more than twenty years1. 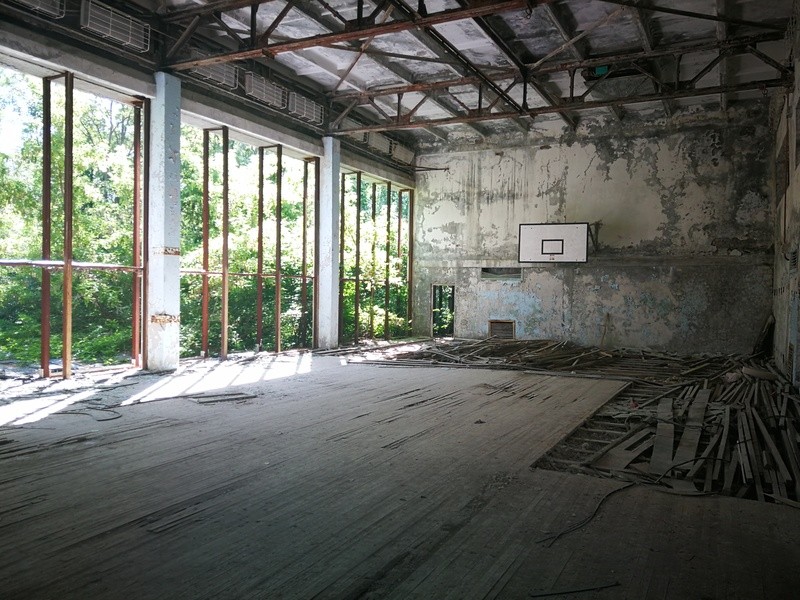 A destroyed indoor basketball court at a recreation centre in Pripyat.

But there is another tragedy here. Both nuclear power and Communism are thoroughly modernist and utopian endeavours, so the modernist architecture and modernist city planning of Pripyat itself could not be more on theme. Whether or not they ever delivered, all of those modernist projects symbolically represent an earnest drive to find purpose in radically remaking and bettering our social and material conditions, simply through human will and human rationality and casting aside the baggage of the past.

By 1986 all those great modernist projects were already long dead. That earnest drive to remake the world for the better had given way to cynicism, and in the west a profound crisis of confidence in our ability to achieve almost anything at all. The nadir was perhaps the 1990s, with an attitude summed up by Francis Fukuyama in “The End of History”: society had reached its final and highest state, in free-trade capitalist liberal democracy. It was not an optimistic view, it was not even resignation. It was nihilism. Such problems that remained under lasseiz-faire capitalism would be with us forever. It was a nadir of the environmental movement, too, in which population control was seen by a large fraction as the only solution to environmental problems. At best, massive invasions of women’s (and men’s) reproductive rights - at worst, genocide. 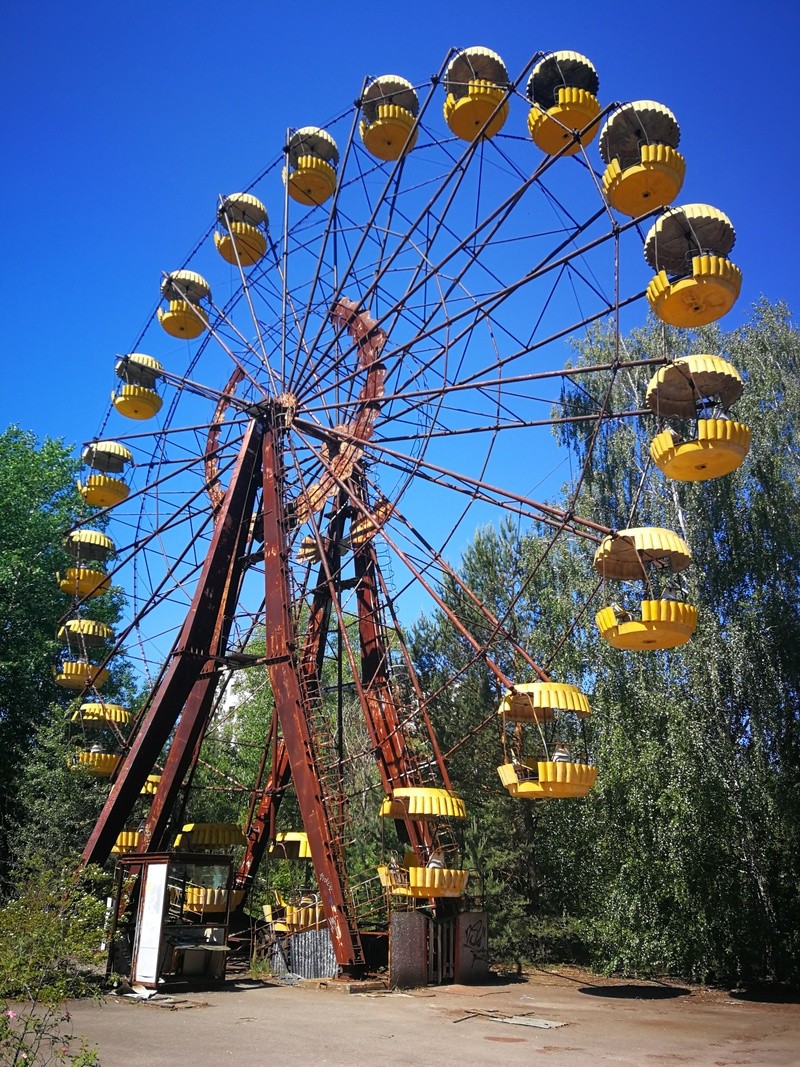 Communism had a very genuine dream of plenty for all. With an eye to the sheer waste and inefficiency of capitalist competition and capitalist concentration of wealth and simple capitalist disinterest in solving poverty, Communism asked “can we do better?”. Once production was planned intelligently, they thought, mass-produced luxury would be the result.

Nuclear power had a dream of electricity “too cheap to meter”, without the hazards and toil required for fossil fuels. Even the modernist way of city planning had a dream of a city that would be more comfortable, safer, cleaner, healthier, and more efficient.

To put it mildly, none of those projects has panned out in reality anything like the dream. In all likelihood they will not soon get given another chance to do so, and would certainly not succeed if they were retried today in exactly their 20th century forms. The market economy, cheap oil, and haphazard suburban sprawl each respectively achieved more in the late 20th century for people’s standard of living than the modernist solution, even if all of those came with all of the problems the modernists had worried about and more.

But it doesn’t mean that all dreams are doomed to failure. Plenty of the other modernist projects did succeed: from the eradication of smallpox to the subways of the world’s great cities, from the longest ever peace in Europe2 to the moon landings.

Those of us in the 21st century face challenges as big as ever: Climate change. Our big cities growing faster than ever seen before. The decline of democracy. An economic system more and more unequal, and more and more controlled by algorithms and a few eccentric billionaires, and that risks being completely untethered from human needs. These challenges need big solutions, not muddling along. 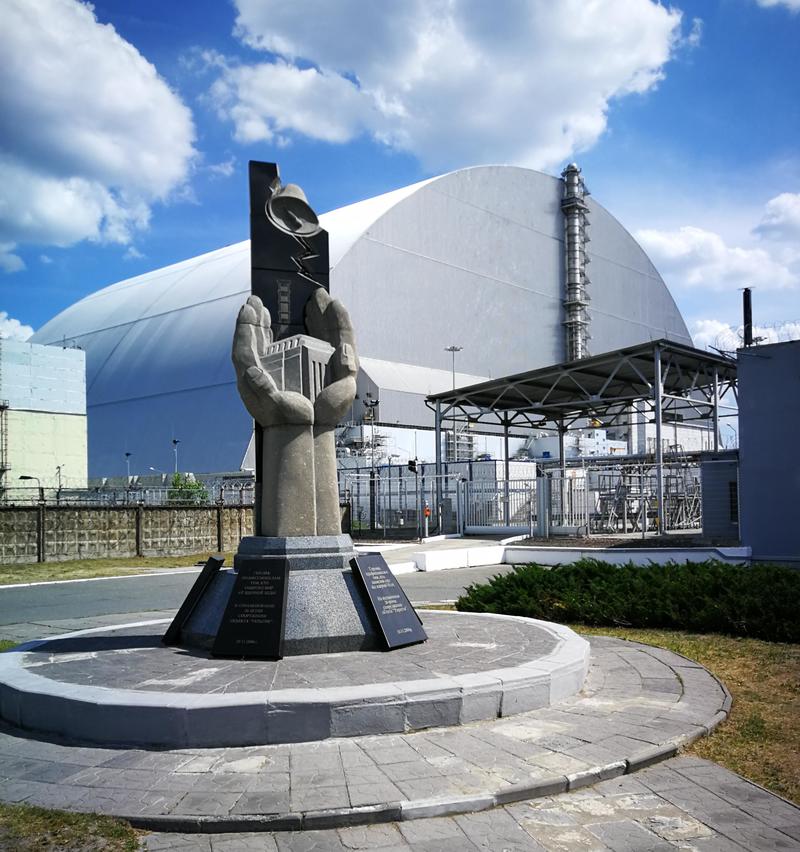 Memorial to the dead at Reactor 4.

So I ask you this, when you think of Chernobyl. Pay your respects to the workers who died preventing the tragedy from being even worse. But not just as victims of an incompetent government, but honour what they worked there to achieve.

Go see the statue of Prometheus. Don’t see it as an ironic symbol for hubris. See that statue of Prometheus as it was originally meant: optimism for the future humanity can achieve, if we have the courage to try. It stands in ruins, because we are imperfect, and sometimes we fail. But we are not perfectly imperfect, and every now and then, we can make our dreams reality.